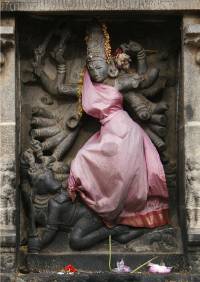 The Department of South Asia (DSA) focuses on the study of culture, history, society, religions, languages and literatures of South and Southeast Asia. Most of the attention is naturally paid to India, the local hegemon. The researchers of the DSA try to understand dynamics of the contemporary Indian society, its development and functioning. They are also involved in the studies of its languages and literatures, especially Hindi, Sanskrit and Tamil. As religion plays an essential role in the daily life in South Asia, research on Hindu and Buddhist religion and philosophy cannot be left out.

Southeast Asia has recently received increased attention as a region where cultural influence as well as geostrategic ambitions of India and China meet. For this reason we are trying to strengthen our research on Indonesia but also other countries of this region.

The youngest field of our research is Central Asia. Being culturally very rich, it is a promising platform for cooperation with other departments of OI.

Besides the research itself, members of the DSA are also involved in teaching at universities, organizing and participating at conferences, popularizing activities and translation of literature.

At present the members of the department deal with the following areas of research: